End of the Skyline is an alternative turn-based tactics game, and our submission for Ludum Dare 47. You play as a rebellious gang of punks/hackers/protestors, parkour-ing across skyscraper rooftops as you evade the hordes of enemy security. 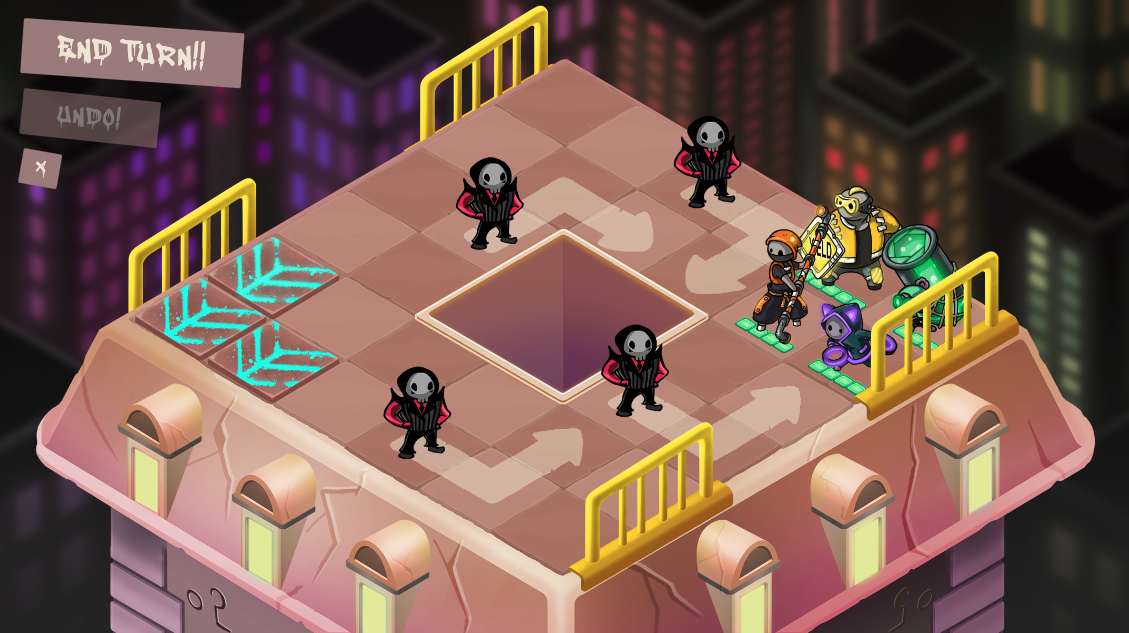 To defeat enemies, you need to finagle them off the edge of the building. They don't have any health bars for you to deplete with complex stat calculations, just their position relative to the edge. And each of your units are equipped with a different skill set for pushing/pulling the enemies.

Or you can just ignore them. The win condition is not to vanquish all enemies, but just to get to the end zone, as detailed with these glowy tiles:

The same skills you can use to finangle enemies off the edge can also be used to finagle allies onto the end zones. The gameplay is really more about traversal than it is about combat.

The game is very short, running at 30 minutes long for 4 quick levels. You can play it for free from here! I'd love to hear your thoughts.

What went well: The units were refreshingly easy to design, because your enemies were asymmetric to your allies.

Dragonstorm is a game where you, as a dragon trainer, can defeat and draft any enemy into an ally. It's very cool. But it means all enemy units and ally units must be symmetrical: they need to be just as fun to counterplay (while an enemy) as they are to play (as an ally). And it's very very difficult! 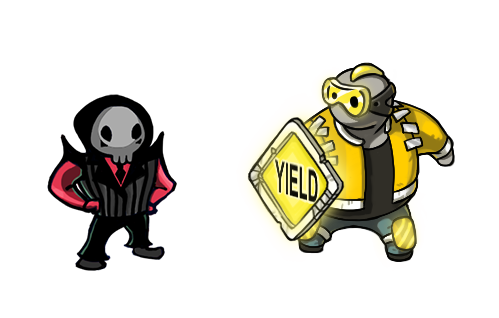 But for End of the Skyline, the enemies are asymmetrical from the allies. And it made it so much easier to design. I can equip your allies with complex & interesting abilities, while I equip your enemies with simple & predictable abilities. I can assign an escape-based win condition to your allies, while assigning a rout-based win condition to your enemies. I can balance with a difference-of-kind rather than just a difference-of-scale.

What could have gone better: The maps were too small for such movement-based units.

While prototyping Dragonstorm, all units had 2 to 3 tiles of movement range. All movement was very restrained. And it worked very well on my tiny 6x6 micro maps: 6 tiles wide by 6 tiles deep.

But when I pivoted to End of the Skyline -- a game designed entirely around tempo movement -- these micro maps began to feel very cramped. Most of the units could move 4 to 5 tiles, and one unit could even move 9 tiles!! For most of your units, you could cross the entirety of the map in two turns. And as such, it was difficult to design a variety of maps that were meaningfully different and meaningfully long.

Even amongst other micro tactics games, 6x6 is absolutely miniscule. Into the Breach is 8x8, Fire Emblem Heroes is 6x8, and Tactical Breach Wizards is 10x10. Most traditional tactics games, like Final Fantasy Tactics, don't limit the maps at all.

I still strongly believe that micro maps are very valuable, especially if you're designing for mobile screens. But whenever I get around to my next move-based tactics game, it would be best to expand the map into something much much bigger.

What could have gone better: The meta loop was completely neglected for the core loop.

Dragonstorm boasts a meta loop of taming and training a variety of different dragons, a similar meta loop to Pokemon. And who doesn't like Pokemon?? This sort of meta loop requires an ungodly set of content (more content than a single indie dev can responsibly deliver), but if it works, it can keep the players engaged from level to level and run to run.

End of the Skyline just doesn't have a good meta loop. Between each level, all the damage you've accrued is carried to the next level: if a unit has died, they are dead for your run. This is something of a meta loop, asking players to strategize the trade-offs of positions over health. But it certainly isn't a good meta loop, since it isn't something you want to do, but something you have to do. It's a lose condition, not a win condition. And that makes it a chore.

It is true that a meta loop just isn't in scope for most game jam projects. But maybe that is why game jam projects can never maintain our interest for longer than ten minutes. As I continue design turn-based tactics games, I need to explore more compelling and interesting meta loops. Especially meta loops that don't require an ungodly set of content.

Get End of the Skyline

End of the Skyline

Parkour-ing across punk city rooftops, push your friends forwards and your enemies away as you make your escape!

The meta was an underlying thought I was considering if this wasnt for a jam(its current state is already great for the timeframe tho!).  Small incremental changes usually feel great especially when the player gets to choose how they are modifying their team.  +1 Movement, or paladin can push 2 enemies at the same time, or rogue could swap with target instead of pull, that sorta stuff.  A few of them could even be scaled back and have their current power be an upgrade like rogue's range could start at 3, paladin start with 1 push etc.  Special goals, or style bonuses in combat could encourage taking risks for more rewards such as XP/Currency/Secret Levels?? which then could tie back in to the progression system.

I'll be making more turn-based strategy games soon, and a progression system is absolutely on the wishlist!

Are you up to talk about something Game Jam related? :)